As promised previously, I’ve made some changes to this site to reduce it’s carbon footprint.

To recap, I was inspired by a study which identified four kinds of energy use communications technology may be responsible for:

A post discouraging you from a new smartphone, laptop or internet-connected microwave feels like quite a separate thing from addressing the first three of these points, so I’ll focus on those here.

To measure the impact of JavaScript and CSS on this site, I loaded the site in Safari, then watched Activity Monitor to see how much CPU time was being used.

I then disabled JavaScript and styles in Safari’s Develop menu, and repeated the process.

The results each time were about the same: there was a small spike in CPU usage when the page was loaded, but that quickly went down to zero.

From this, I can infer that there’s nothing about the JavaScript and CSS on my site which causes any significant device energy use.

Does Dark Mode Save Power?

Something I’ve been wondering about for a while was whether bright, white web sites use more power than dark-coloured ones. Turns out that this was a rather dated notion in 2007, but may be making a comeback with evolving OLED technology.

As it’s pretty safe to say that there would be very few CRT screens being used to access this web site, the decision of whether to switch to a darker colour scheme should be decided by LCD vs OLED screens. However, I haven’t been able to find any reliable sources on how common OLED screens are, and what the power consumption differences would actually be in practice.

As such, I feel it’s a bit premature to switch to dark mode just yet, though I’ll certainly be keeping an eye on it.

For what it’s worth, this site uses the prefers-color-scheme: dark CSS media query. If you have an OLED screen and haven’t already, consider enabling dark mode to save a bit of energy.

My spirits were pretty high after seeing how well my site did with consumer device energy use.

Looking into how bloated this site has become brought them crashing down to earth.

The network tab of Safari’s developer tools show how unnecessarily large the front page was: 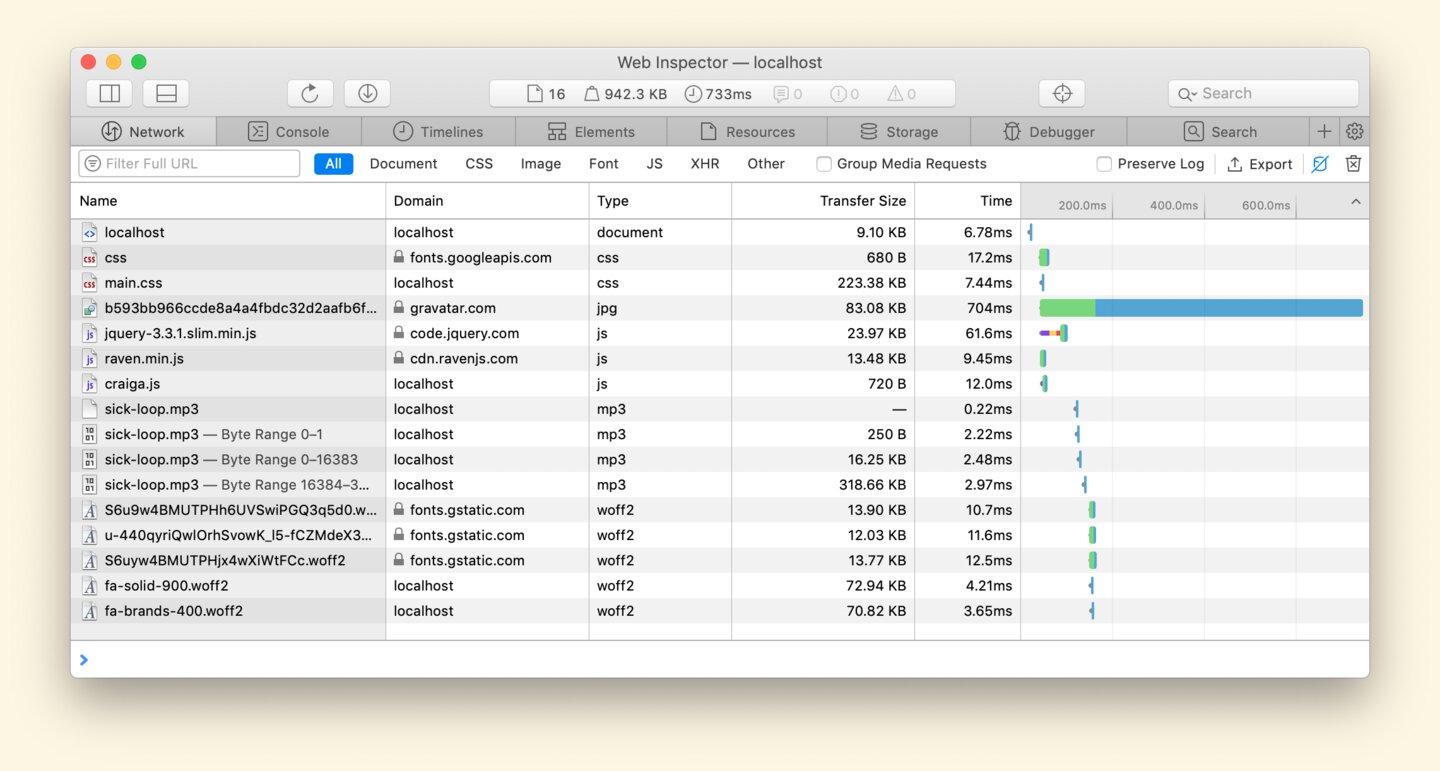 Grouping these resources, we see some very hefty assets are being downloaded for what is a very simple page:

I decided that the HTML of the page and a picture of my face is the important content of the home page, then I measured the size of everything else in relation to that.

Here are the steps I went through to slim this page down:

After this, the network tab in Developer Tools was looking much better. But there was one more asset I could look at shrinking—the picture of my face.

I had always served this image from Gravatar, a site which serves user avatars to sites which don’t want to manage user avatars themselves. I was really surprised by how little the avatar they served was optimised for use on the web.

Switching to a version of the image optimised using MozJPEG saved a further 37 KB. 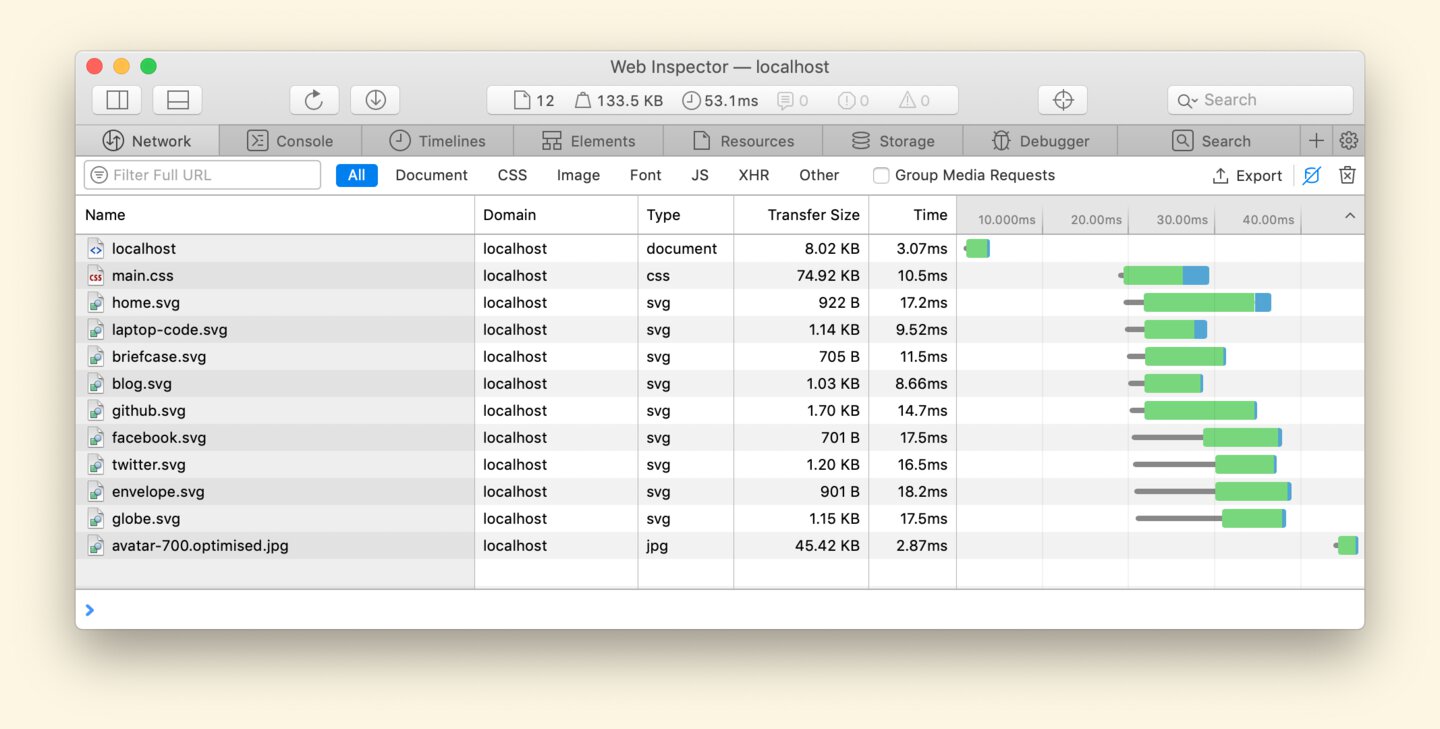 As this site is hosted on GitHub Pages, it is served from Fastly’s CDN which has a pretty widespread network which I get for free.

I’m unable to change the site’s caching behaviour, but thankfully GitHub Pages’ default response headers are pretty much what I’d want. They include a Cache-Control header which allows assets to be cached for one hour, and an ETag header which clients can use to figure out whether assets are still valid once that hour is up.

Ideally the Font Awesome icons I’m using would come from a separate CDN which serves those assets to lots of sites with a really long cache time, but I wasn’t able to find a service offering this.

As this is a static web site, it doesn’t require much CPU to keep it running. After each commit to the master branch, GitHub compiles the site and puts it onto it’s CDN network.

There’s not a lot of information about GitHub and their energy use that I was able to find, but there’s not a great deal of energy being used generating, storing, and serving the site.

Before starting this exercise, I ran tests on every change to this site on CircleCI. These tests checked that the site’s configuration was not badly broken, and that the site was spelled correctly.

CircleCI runs on AWS’s Eastern US regions, which have come under criticism from Greenpeace for not keeping pace with the industry’s efforts to switch to 100% renewable energy.

For this site, constant integration isn’t that important. I run these same tests in a pre-commit hook, GitHub handles misconfiguration gracefully, and spelling mistakes aren’t that big of a deal.

Given this, I’ve switched CircleCI off for this site.

The majority of this work was done over a few hours across two Sundays while enjoying a few beers. I feel like even this small amount of effort has made a big change to amount of energy used by this site.

A nice side effect of this work has been making this site feel super fast.

There’s opportunity to take this even further by switching to a lighter CSS framework (or ditching CSS frameworks all together), but that would involve quite a bit of work.

If you run even a small web presence, I’d recommend that you go through the a similar process.

I'm a freelance digital product developer specialising in Python and Django. I've given some talks about my work. Read more about my work in my CV, or take a look at my open-source code on GitHub.

I'm staying at home during the COVID-19 crisis.

I sometimes blog about things. Most recently, I wrote Testing your full Heroku stack.

I'm a bit of a nerd for making lists. Getting Craft Beer in London during COVID-19 was my most recently updated list.

My home town is Melbourne where I used to play bass guitar in Look Who's Toxic.

How to move fast without breaking things

Renaming master to main on GitHub and Heroku

A quick note to help others using Juniper, a Rust GraphQL library

How to add dark mode to your web site.

A thing I built to stay up-to-date with events at Rough Trade.

Thoughts about the climate impact of my work, and what I can do about that impact.

or: how I learned to stop worrying and love smart people

So, you're visiting Melbourne?

Craig's guide to his home town.

Those Years I Worked in an Ice Cream Shop

Back in the '90s, I was making waffle cones.

Newer Australian suburbs seemed like a good idea, but are terrible in practice.

Determining a Parabola with a Vertex and Y-Intercept

How to determine if text displayed on top of a colour should be black or white.

Getting Craft Beer in London during COVID-19

A list of breweries with online shops which will deliver beer to me, a member of the public in East London.